Why demographics may drive business owners to sell: Re-evaluating your transition and exit


[Editor's comment: Many business owners and CEOs have been delaying the process of preparing to sell... thinking that it is some point off in the distant future.  It has occurred to me that perhaps the actual best time to sell might be a lot closer than they think and may be more dependent on demographics than economics.  - DPM]

Have the markets for transitioning your business fundamentally changed? In the early 2000's there was a robust market for selling businesses.  The economy was strong, the market was flush with private equity, and the opportunities to grow businesses seemed endless. Then came the great recession of 2008 - 2012.  Was this recession a blip? Will we be soon returning to robust economic times over the next few years? Many will be hopeful leading up to the 2016 presidential election cycle. Regardless of your political leaning, there may be forces at work that neither candidate could overcome.

Demographics have a profound impact on business cycles. Twenty years ago, I attended a conference with the keynote address given by noted demographer, Harry Dent, who forecast several major economic cycles over the past several decades including the early 1980's and the current recession starting in late 2007. Dent's basic premise is that business cycles and opportunities are driven by demographic-based economics. Since 70% of the economy depends on consumer spending, he reasons, tracking consumer spending volume is a key driver. Spending habits, life decisions, etc. are driven by significant demographic changes. If you follow the bulge of baby boomers through the lifecycle, the last of the baby boomers reached age 50 in 2015 - a time in life that starts a decline in overall family spending.

See the graph below which shows peak U.S. family spending. While it shows a slight spike, coincidentally in the 2016 election year, Dent shows that the next decade will decline, bottoming in 2023. 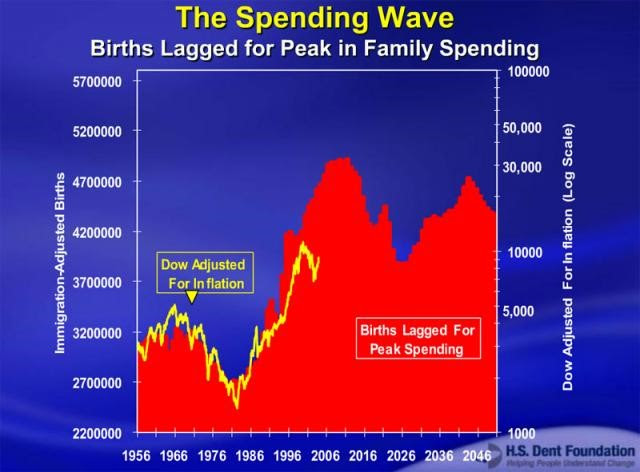 Demographic spending patterns may indicate 8-10 more years of decline. Whether or not you believe Harry Dent's many other conclusions, it is interesting to note that in recent years economists have become focused on economic trends caused by demographic extremes. Declining birth rates and aging populations in Europe and Japan foretell long-term economic decline. Issues with a dramatic imbalance of males and females in China due to the 1-child rule (mostly male) are causing predictions of a serious aging population within the next 20-30 years, etc. The truth is, politics and policy aside, that the next decade could continue to be one of decline in the U.S. until the spending impact of the echo baby boomer generation (2024 -2050) takes effect.

Baby Boomer Business Transition Bubble.  The number of baby-boomers who own businesses who are at (or approaching) retirement age who need to sell to provide liquidity for retirement is at an all-time high. Consider this - in 2001 the number of business owners with businesses between 5 and 500 employees that needed to sell was 50,000. That number reached 350,000 by 2006 and 750,000 by 2008-10. There were relatively few sales in 2008-2012. Today, with that four year pent up supply of sellers, the number is estimated to be between 1.2 to 1.5 million.

What does all that mean to you, as a business owner? If you are in your forties or early fifties with many work years ahead of you, your business is performing well, and are in an industry with strong growth, you should focus on strategies that will help you continue to grow and expand. However,  if there is little growth in your industry, or if your industry depends on robust overall economic growth, perhaps now is the time to prepare to exit.  In these situations, it is possible that the value of your business may not be higher in 5-10 years - it may actually deteriorate.

If a business owner is in his/her mid-fifties to mid-sixties and the business has strong EBITDA over the past 12 months, consider planning to exit as soon as your company can be prepared. As we have outlined in other articles, it may take 12 -30 months to prepare and execute a sales transaction. Investment bankers, report that companies in this situation are commanding valuation multiples at near-record levels and are in high demand. So you could take some chips of the table.

Knowing when to harvest your business may be your most important decision
If you would like to have a no-obligation conversation about building value in your business and evaluating the optimal path and timetable for a successful transition and/ or exit, please contact us at Mead Consulting Group. Our senior consultants have been involved with helping dozens of business owners maximize value as well as having the experience of previously navigating their own businesses through successful exits.  www.meadconsultinggroup.com
Posted by Dave Mead at 8:52 AM

Welcome to Mead's Issues for Growth

Since 1991, we have been publishing a periodic eLetter "Issues for Growth" that contains articles or thoughts of interest to business owners looking to grow and improve their businesses. We invite your comments and discussion.

Dave Mead
We have been consulting with small and mid-size businesses for over 30 years, helping companies move to the "next level of success" by focusing on strategies that the company can execute well and aligning all activities within the company to those key strategies. I have started and run 7 companies - a couple of great successes, a few moderate successes, a couple of screaming failures.